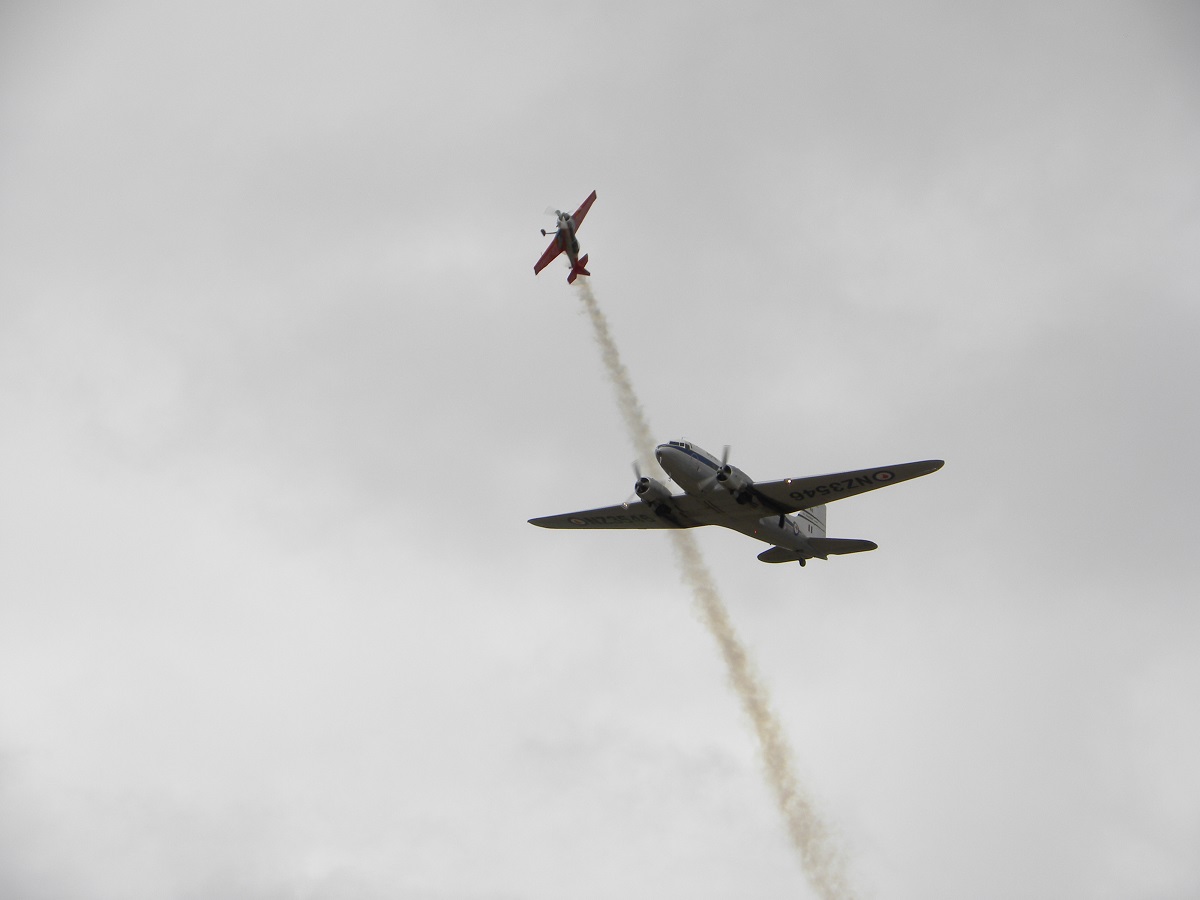 The heat of the afternoon sun blasted the mountainside, reflecting off the exposed rock and bare earth, pounding our bodies with waves of heat. Not even the welcome shade of the trees could slow the rivulets of perspiration running down our bodies. Amongst the screening vegetation the shimmering reflection of our target could just be made out – the wreckage of another aircraft downed during the conflict of World War 2.

After a few more steps Alex and I could see in front of us, the aluminium fins camouflaged by the bush for five decades. They don’t belong in this environment. They are an alien relic symbolising personal stories yet to be fully told. Amongst the trees are scattered a variety of items sprayed out from the impact site – here a radial engine, over there a radio set, in between an oxygen cylinder, all surrounded by a random collection of aircraft parts littering the landscape.

Outback travellers will come across many magnificent and intriguing sights while exploring our fantastic country. Often undervalued are the relics relating to World War 2, particularly the air component of Australian servicemen and our allies contribution, who gave their lives defending our country. Even now there are many airmen whose final resting place has not been found.

Every crash site represents human stories of courage, dedication and tragedy that deserve reflection to understand more about the history of our country. This article will visit four sites of aircraft remains accessible to the adventurer willing to explore the outback of Australia. The story of these sites is a poignant reminder of the turbulent times during which the existence of our country was threatened and young men gave their lives to defend our values and style of life.

They date from a time when northern Australia and Darwin in particular, were the very epitome of the frontier - hot, smelly and dusty; a cosmopolitan mix of races carving a living out of any opportunities that came their way. By 1941 Darwin was a garrison town where soldiers and airmen danced with any available women at the newly built Hotel Darwin, the Raffles of the North. During the wet season before the Japanese bombing, they would have been glued to their girls in the steaming atmosphere of the wet, with the agony of the mosquitoes and sandflies only anaesthetised by alcohol. This was the world into which Australian and American servicemen were thrown to await an onslaught they could barely imagine. Singapore, the bastion of the British Empire of the east, had fallen to the dismay of the world, with the rest of South East Asia was open to conquest by the Japanese.

Australia became a fall back position from which to build strength to counter the expanding Japanese empire. The clash of values that ensured cost the lives of many Australian, Dutch and American servicemen. The resulting conflict still leaves reminders in the form of wreckage, artefacts and constructions that can be interrogated to deliver the stories of those involved.

In north Queensland lie the remains of 'Beautiful Betsy,' a B24 Liberator, whose wreckage lies smashed across the Kroombit Tops west of Gladstone. An easy drive through Caliope leads after a few kilometres to a turnoff to the Tablelands road and Kroombit Tops National Park. The road in is easy to follow, leading up into the ranges of the national park through increasingly spectacular scenery. From a sign posted forestry base, there is a 35 km round trip to the site on a loop road which is easy in good conditions, but could be of moderate difficulty after rain.

'Beautiful Betsy' was a B24 Liberator that experienced a wide combat career with the 528th Bomb Squadron of the 380th Bomb Group of the United States Army Air Force. She had been retired into a cargo role and was due for retirement. War weary bombers were often converted to support roles after being replaced by new aircraft. USAAF units in Australia used to top up their rations by buying produce with mess funds. Each member of the squadron paid a levy and when Betsy departed for the last time she carried six hundred Australian pounds. After this flight she was due to be retired as she has accumulated over 1 500 airframe hours and could justifiably be considered ‘war weary’.

She took off at 2200 hours on February 26 1945 from Fenton airfield in the Northern Territory. The aircraft was under the command of pilot Lt. William McDaniel (USAAF) on a supply flight bound for Eagle Farm near Brisbane.​ Aboard the ex-bomber were two RAF Spitfire pilots in addition to the American crew. "Beautiful Betsy" failed to arrive and despite many searches was never found. It was finally discovered on August 2 1994 in the ranges south east of Biloela,Queensland.

After discovery in 1994, various remains were recovered by US Army personnel, including a dental bridge, bone fragments, personal effects and material evidence such as dog tags, bracelets, coins, gold rings, an aviators ring and badge, flare gun with flare, a Bomber Badge, whistle, dress uniform belt buckles, British and American buttons, a razor, cigarette lighter, eyeglass frames, a pocket watch and a 1938 Class ring. The combination of this pitiful collection of relics serves as a poignant reminder of their lives and the contribution of these men to the war effort.

Tail section of B24 ‘Beautiful Betsy’, lying upside down in the Kroombit Tops.

Another aircraft of the 380th Bomb Group lies smashed over the terrain of the Cox Peninsula west across the bay from Darwin. This B24 Liberator, named ‘Milady’, also belonged to the 380th Bomb Group, who initially moved to an airstrip named Long and later to Darwin in 1944. The 380th lost 53 aircraft in operations from Australia, some missions taking up to 16 hours return.

The cause of this crash was not identified but two theories were put forward. Either the aircraft had suffered damage from bomb blast following a low level practice attack or the pilot lost orientation during a low level run along the coast. What happened will never be known, but the remains are another reminder of the many crews who lost their lives in operations fromNorthern Australia.

Tail section of B24 ‘Milady’ at Mandorah, Cox Penninsula.

The wreckage is located at Mandorah on the Cox Peninsula. After following theCox Peninsula Roadto Mandorah, turn left toward the Radio Australia Transmitting Station and look for the sign on the right hand side. The interpretative panels supply full background information to this interesting site.

Up on Cape York near Bamaga airport lie the well known remains of two easily accessible aircraft.  Sign posted at Bamaga on the road to the airport are the remains of USAAF Douglas C-49H (DC-3) VH-CXD, operated by Australian National Airways under charter to the military with RAAF aircrew. It left Brisbane at 8:39pm on May 4 1945 on the regular courier trip to New Guinea.

While circling to land at Higgins Fieldin far north Queensland it crashed at 5:18am on May 5 1945 when it struck the top of a hill while landing in darkness. It was about 500 feet low on approach and was partially burnt in the crash, incinerating the crew and passengers. All six personnel on board were killed – Flying Officer William Ernest Clarke (an ANA civilian pilot), W/O James Hillman Hornbrook (21), F/Sgt Neville Tasman Browne, W/O Alfred Henry Gidley, Sgt Henry E. Doherty and Cpl Rudolph M. Kozen.

Internal shot of the remains of the DC3 at Bamaga.

On the north west perimeter of the airport lie the remains of a Bristol Beaufort, which probably crashed on landing. It is difficult to identify the exact aircraft because information is insufficient to make a positive identification. At least three Beauforts were lost at Bamaga.

This one comprises the central fuselage section, tail unit and a pair of wings, sufficient to remind us of the combat efforts of so many young men during World War 2.

View through the rear gun turret of the Beaufort at Bamaga airport.

The Beaufort was a significant aircraft in Australian history. Along with the Wirraway, it was selected for manufacture in Australia at the beginning of World War 2 to rapidly build an Australian aircraft industry. The Beaufort became a widespread logistical operation involving six hundred companies across three states. The capability that it helped build led to the later building of the Beaufighter, Mustang and a range of other advanced aircraft.

We are indeed lucky to be Australians and our fortune is recognised by an increasing number of people who wish to escape the tensions of their own countries. These remains are worth more than a cursory inspection by outback travellers. Each represents a part of our history and the end point of some of the lives lost in the defence of our country and the values which define who are as Australians.

To quote, 'Death may claim a life, but not the legacy left behind.' Alexander Dulaine, from    'Fire Eye.'