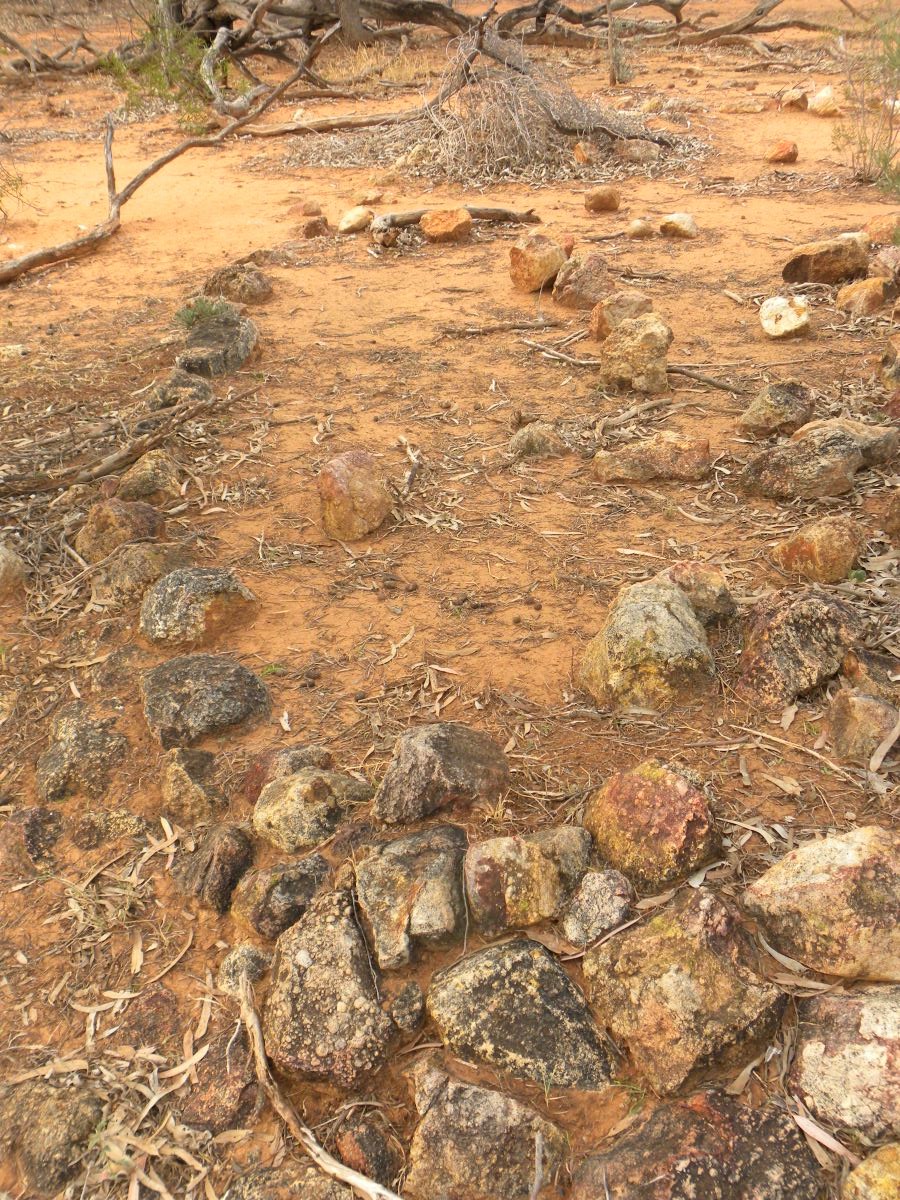 Something stopped me in mid stride. Did a whispering spirit catch my attention or was it just a slow mind processing an image from a few minutes before? Whatever it was, I back tracked and gazed down onto the patch of rich red earth. The arrangement of rocks under the acacia wasn’t natural. It had been placed by the hands of man. By whom and by which people is a mystery.

OutbackAustraliais still wild enough to have lingering unsolved mysteries. The Leichhardt expedition disappeared from history in 1848 with little trace found. Confident that he could solve many problems about Central Australia by skirting the northern limit of the desert, Fredrich Wilhelm Leichhardt set out from the Condamine River in March 1848. By April 3 he reached Cogoon Station on the Darling Downs. After moving inland from Cogoon the expedition disappeared. No evidence showing conclusively what happened to it has been found.

This was just one of the random thoughts that invaded my mind as I stood beside a channel flowing into the Paroo River in South West Queensland. The rocks formed a rough circle, about 25 metres from the channel. The southern side has been terraced to a height of about 300 mm by piling rocks together. The boundary rocks on the eastern side had been disturbed and thrown haphazardly aside, mainly into the centre of the oval. A few metres to the east were the remains of an old fence. Cedar pine posts leaned wearily in defiance of the elements, drilled by hand for the rusty wire that draped in tangled submission across the red land. Time has finally beaten down the toil of an early settler. The fence ran roughly north south then turned a right angle to the east around the still standing corner post next to the mystery circle of stones.

Aboriginal people established themselves in the Paroo and surrounding area about 20 000 years ago. The whole catchment is littered with stone artefacts, indicating a long settlement history. The Aboriginal peoples came from the Maranganji, Kalali, Badjiri, Parundji and Kunggari tribes. The Paroo River gets its name from a variation on the name of an Aboriginal Paakantji group, the Parundji.

The Paroo River is the last remaining free flowing tributary of the Murray‐Darling Basin. It has a catchment of 76 000 sq. km, across the north west corner of the basin, half in Queensland and half in New South Wales. The river starts in the gorges of the Warrego Range in Western Queensland. After crossing the border intoNew South Wales it spreads over the vast floodplains near Wanaaring, helping to sustain many significant wetlands. About 600 km down stream it reaches the overflow lakes between Tilpa and Wilcannia, called the Paroo Overflow.

From 20 000 years ago, Aboriginal people experienced a very different river. It probably had a cooler climate, a different range of plants and animals and most likely a permanent flow. Since then, a warmer climate and other changes mean the Paroo has become an ephemeral river. Although it floods regularly, water rarely reaches theDarling River.

The Paroo and Warrego catchments were not explored by Europeans until 1845. Thomas Mitchell passed through the region in 1846. By 1862, there were already some established pastoral stations in the area. A settlement arose beside a reliable waterhole at the intersection of two major stock routes. This settlement became Cunnamulla in the late 1800’s. Until the mid 1940’s the area had a small number of large pastoral stations and a small population to match. After the war, the area experienced significant economic and population growth following an increase in wool prices. Beef cattle and sheep for wool production are still the main industries in the area. Due to the small irrigation industry and sparse population, demand on freshwater has stayed low. As a result the Paroo River is the least regulated river in the Murray-Darling Basin.

Exploring the Paroo on foot can be an enchanting experience. Although it’s cattle and sheep country, a sense of wilderness can be found among the maze of braided channels. Silence is broken only by bird calls, the click of insects or the splash of turtles and fish in pools of still, brown water.

In the ancient dreaming, the river was created by a spirit. The Moonagutta was a water spirit of unknown shape and size who lived deep in the waterholes of the river. The river was made by the Moonagutta. The Moonagutta became the only spirit and soul left, wiggling in the silt left next to receding water and devouring all the other Moonagutta. He shaped the first rivers of life through the channels he created while trying to escape floodwaters. When he came to a sandy stretch free of the red stained rock that can line the river, he was able to bury deep down to create the waterholes we see today. The background story to the river paints a powerful and spiritual sense of place.

Standing before the mystery site, some deductions followed my observation, possibly wrong and open to other interpretations. The rock arrangement probably predates the fence and the fence builders threw one side of the oval aside to make room to work. The rock arrangement enclosed a flat area about 6 metres across. Why bother? There is plenty of flat ground a bit further away that would avoid the need to terrace and back fill.

Only a single Aboriginal artefact was found near the site, a simple flake probably washed there by flood. Aboriginal ceremonial sites did not have tools lying around as they were for religious purposes only. Bora sites normally have two rings of markers, a larger one for general members of the clan with a pathway to a smaller circle for initiates. They are possibly oriented toward the direction of the Milky Way from August to March, when it is aligned almost vertically due south.

The Aboriginal peoples certainly used stone arrangements. Stones were placed in a certain way to form circles, semi-circles, lines and routes. Smaller stones were used to keep the larger ones in place. The arrangements sometimes identified ceremonial grounds and tribal boundaries, as well as other sorts of ownership boundaries. However, Aboriginals did not terrace with rocks. That technique fits better with the practice of a European. But why would it be done?

Questions followed my observation. Why terrace to mark that flat area of ground when there is plenty of flat ground not far away? Going to that trouble implies that other flat ground wasn’t available due to water or there was something special about this particular site, but what? Combat between Aboriginal warriors? A death? A place to leave supplies that could be easily found? Was it a camp for workers building the old fence? Is it an early stockman’s camp? Perhaps it was a camp for prospectors of opal or other minerals? The act of terracing implies deliberate effort, a longer term stay and perhaps a need to keep the area dry for a fire, tent shelter or supplies. There’s a bit of work involved in locating rocks this size and carrying them back. An additional thought is that such a spot has softer, alluvial ground than surrounding areas that would make digging easier for terracing or burial.

The age of the site is guess work. I doubt that it’s an Aboriginal site. The property and others around it were part of a Kidman station. At one time horses were raised on the property for the British Army inIndia. Given the settlement history of the area and the lack of any relevant oral history, I estimate late nineteenth century. At best it may be early twentieth century. That’s a fair span of time but the best guess on the information available.

The site appears old enough for environmental or seasonal conditions to have been quite different when it was made. Such a difference could help explain the purpose of the site. The impact of a heavy fall of rain and consequent flooding is readily apparent to anyone who knows the red soil country. Even 10 – 15 ml of rain is enough to create shallow surface flooding and hinder movement for days. However, I’ve never seen a camp site marked out in this way. The reason for the layout is probably quite obvious and simple but it has me stumped.

The puzzle remains. Perhaps readers have some knowledge of the past that can solve this teasing mystery. Did early stockmen or fencers have a particular way of setting up a temporary camp? Was there a traditional way of marking out special sites? Perhaps there is a reader aware of other similar sites where the background story is known.

It would be interesting to know who left this mark upon the land and why.