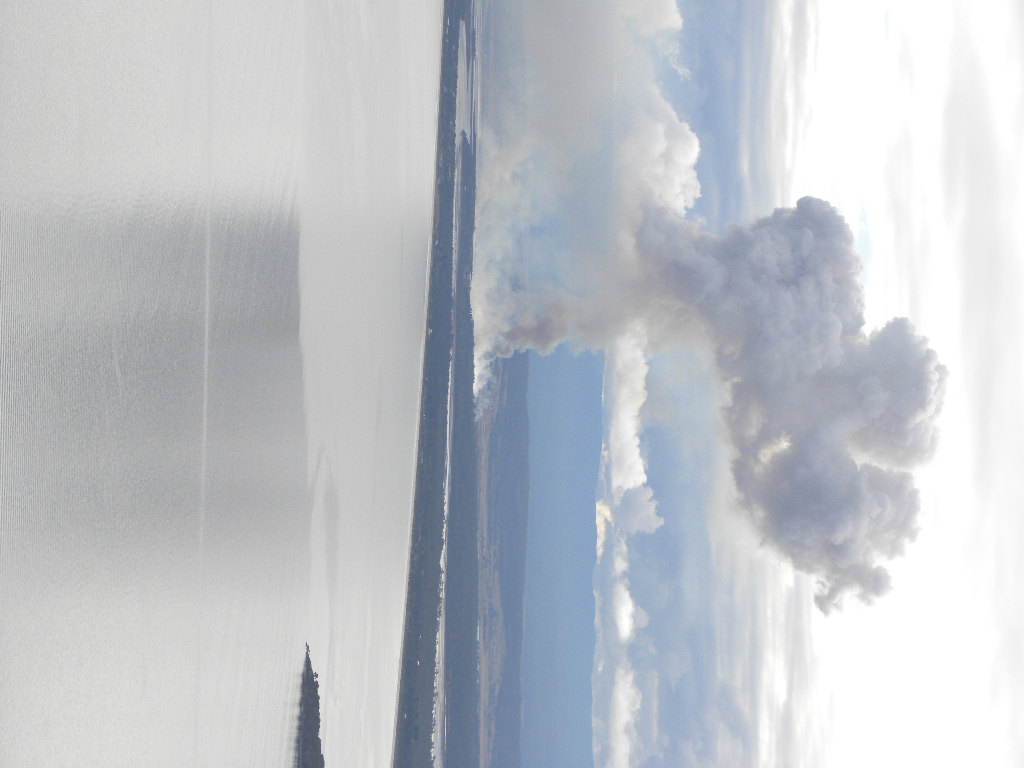 As a young man I felt sympathy for the Aboriginal people ofAustralia. My perspective had been framed by an education based around a Eurocentric view of the world. As a result, I saw the Aboriginals as a people trapped by the harsh Australian environment and unable to progress technologically in their development. However, while I value the achievements of Western civilisation, I have since learnt that the Western lens is not the only way to look at the world.

While committed to a career as a Principal, I was also a hunter and a pilot. I walked the landscape ofAustraliaseeking feral game in their element and flew across vast stretches of country, observing things that many Australians will never experience. I was fortunate to share some camp fires and go hunting with Aboriginal people, talking and swapping experiences. As trust developed, some knowledge was offered and stories told about the Aboriginal and their connection with the land.

I viewed the early paintings of the Australian landscape and reflected deeply as I hunted the red soil country, observing the huge number of stone artefacts scattered across the land and exploring the remains of landscape templates created by sensitive burning. These templates produced a mixture of grassland, scrub and bush to create environments that attracted wildlife as a food source and made hunting easier.

Through the eyes of a hunter, I sensed that the landscape had been managed to optimise the availability of food. Any human group that time to create a complex combination of religion and cultural beliefs is not living in continual hardship and must have established fairly good control over their food supply to allow free time for intellectual and religious creativity. Gradually, niggling doubts challenged my previous perspective and forced a major re-evaluation of my perception. The Aboriginal people were not trapped by their environment but had developed an incredible understanding of and close connection with the land. Tribes and family groups were responsible for their own share of the landscape. Responsibility was handed down on the basis of powerful but simple principles. Australiamay be unique because the whole continent was managed with care and thought to optimise the survival of the indigenous people.

This is not to idealise the Aboriginal way of life. It was harsh and unforgiving and forged through a very different view of the world. Their connection with the land was based on very simple but powerful principles. They had a responsibility to ensure that all life flourished. Their security hinged on ensuring that plants and animals had the right conditions to be abundant, with their location predictable and therefore convenient to harvest as needed. I suspect that Australiais the only continent where such a cultural paradigm enveloped the whole land. It meant that as a people, they acted locally to ensure the best conditions for their survival, but did so under a unique global perspective that encompassed the whole continent.

Why this is so may never be fully explained, but as a hunter I have a hypothesis that niggles away at me. The Aboriginal people were here for 50 000 or more years, witnessing the disappearance of the megafauna. Whether they contributed to this or climate change was responsible is irrelevant. I suspect that this environmental change was significant enough to be incorporated into their view of the world. After all, it was their own survival at stake, reinforced by the sweeping climate changes that would have taken place during their occupancy of the continent. I also believe that the landscapes painted by early artists that hang in the Tasmanian Museum were not natural, but shaped over thousands of years by Aboriginals through the careful application of different types of fire to create an environment that maximised their chances of long term survival. They used different types of fire at different times to optimise the patterns of growth across the land.

For thousands of years the Aboriginals used fire as a natural way of refreshing the land. Old vegetation was burnt off to encourage new growth and attract animals to chosen areas for harvesting at will. A pattern of grassland surrounded by bush allowed the hunter to stalk within spear range or trap game for harvesting during communal drives. Such activity also involves the development of complex language to ensure success. As an example, I have counted at least twenty six words to describe water used by desert people, depending on location, permanency, season, reliability and freshness. Much ofAustralia’s vegetation relies on fire to regenerate so they used their knowledge of the landscape to fine tune nature to their best advantage. There is ample evidence that the coastal fringes and interior ofTasmaniawere regularly burnt to make travel and hunting easier.

Various academics would not agree and claim that while the Aboriginal people used fire, there is no evidence of its conscious use as a carefully applied management tool. There is also a view that even if they did, it is unwise to say so because it would encourage ill-informed burning and environmental damage. From my perspective, I would disagree and so would the many farmers whose security has depended on the careful management of their land. However, I would also argue that few farmers fully appreciate the real complexity and environmental understanding of indigenous land management.

Bill Gamage, in his well researched book, ‘The Biggest Estate on Earth – How Aborigines Made Australia’, presents a detailed perspective on Aboriginal land management. Reading his book was a revelation and very heartening. It reinforced my thinking and gave credence to the doubts that had nibbled away at my preconceptions for so many years. While I use a rifle or a bow instead of the Aboriginal spear, I can still see in the remains of the landscape that they created a hunters paradise. They had shaped the landscape so that a sustainable food supply was available for harvesting with the least amount of effort, even in the difficult terrain and thick vegetation of Tasmania’s wilderness. The wily senses of the animal were balanced by fire management of the landscape against the capabilities of the hunter.

Early settlers commented on the park like scenery that confronted them, the expanses of grassland and the unusual mix of grass, scrub and forest they regularly encountered. They were looking at a landscape shaped by careful management over millennia to enhance Aboriginal survival. Gammage documents these views in great detail. For me the evidence lies in what has happened to the landscape after the destruction of Aboriginal management.

Wild fire does not appear to have been a problem until the European arrived, bringing crops, fences, sheep, cattle and buildings that could be damaged or destroyed by uncontrolled fire. While the Aboriginal managed the landscape, controlled burns eliminated the fuel to support intense wild fires that would have threatened their survival and the balance of the landscape. The reduction in the number of Aboriginal people also reduced controlled fire management of the landscape. When fires occurred, they were hot, intense wild fires that destroyed vegetation, wildlife and everything else in its path.

The Black Thursday fire of 1851 was a catastrophic event that swept Victoriaon February 6 of that year. It is considered the largest Australian bushfire in recorded history, with a quarter ofVictoria being burnt. Twelve lives were lost, along with one million sheep and thousands of cattle.

The Picturesque Atlas of Australia (1886) reported that, "The temperature became torrid and on the morning of the 6th of February 1851, the air which blew down from the north resembled the breath of a furnace. A fierce wind arose, gathering strength and velocity from hour to hour, until about noon it blew with the violence of a tornado. By some inexplicable means it wrapped the whole country in a sheet of flame - fierce, awful, and irresistible."

The year preceding the fires was exceptionally hot and dry and these conditions continued into the summer of 1851. On Black Thursday, a northerly wind set in early and the temperature in Melbourne was extreme. The north wind was so strong that thick black smoke reached across Bass Strait to northern Tasmania, creating a thick, murky mist.

After forty years of walking and flying over the landscapes ofAustralia, my opinion is that the Aboriginal people were finely tuned to the Australian environment and that we bring wild fire on ourselves. There is a tendency to leave the bush alone and let the fuel loads build up until, to our surprise, it explodes into flame. I also suspect that the Aboriginals farmed on a continental scale but were not farmers as we define because they had no need to adopt a sedentary life style. Our blinkered view of Aboriginal culture means that we do not fully appreciate the knowledge the Aboriginal people accumulated over thousands of years on the management of the Australian landscape.

While saying sorry may have made many feel good, a better acknowledgement of the Aboriginal people would be to recover their knowledge on landscape management using fire. My belief is that we delay the burning off that is essential to the Australian landscape with a range of excuses until the bush explodes into uncontrollable wild fire. We then fight it with all the aids of modern technology including using helicopters as fire bombers, but the fire is so intense vegetation and wildlife is devastated.

Consultants are brought in, research undertaken, community consultations held and strategic plans developed but no real action is implemented that matches the needs of the Australian landscape. As soon as the smoke of a controlled burn curls up into the sky, complaints will start. I have seen the elder Aboriginals shake their heads in disgust when they witness uncontrolled fire consuming the landscape and can finally understand their perspective. The complainants show no understanding of the real needs ofAustraliaoutside the city.

There is joint management of some national parks where firing is used, such as Kakadu, under the control of Aboriginals and there are regular burn-offs on Aboriginal lands around Australia. However, Aboriginal advice is not always applied effectively. State and privately held lands could benefit from their input.  Places like Kakadu and perhaps Uluru have shown such input to be beneficial to the landscape.

The Aboriginals understood which plants to burn, how often and how hot. They understood the role of fire in the Australian landscape and managed its timing, intensity and duration. Western conceit has difficulty recognising that a supposedly stone age people could manage things better. The evidence is there if we want to see it. The knowledge is still there if we chose to use it.

These thoughts are motivated by a fire that destroyed my house totally. Fire not only destroys property, but also relationships. The full impact may not arise until a year or more later, but it lurks in the background with only a fine twist of fate to determine the final impact.

The Aboriginal people have valuable knowledge that we need. We should swallow our pride and tap that knowledge to benefit the land and reduce our own exposure to the danger of uncontrolled fire.